Why might disaggregated smart meter data be useful to anyone?

Let us assume that people are motivated to improve their energy management. Do they have a sufficiently quantitative understanding of their energy consumption to prioritise correctly?

Prior to the availability of mains energy supplies, most individuals would have had an intuitive, quantitative understanding of the amount of energy consumed by the household. If the stove needed more fuel then someone had to manually shovel solid fuel into it; you couldn’t help but notice how much energy was being consumed. In this situation, most individuals would have an intuitive feel for how much energy it took to, say, heat the living room for one evening or cook one meal.

In today’s industrialised societies, we do not have such a concrete, tangible understanding of the amount of energy we use. It is a miracle of civil engineering that the energy equivalent of 3 tonnes of coal2{#footnoteref2_ozpa89k .see-footnote} is delivered into our homes every year without any noise, any manual labour, any dust, any inconvenience for us.

When we turn on an electrical device, it just works, without any indication of how much energy it’s consuming. Hence, when faced with rising electricity bills, we struggle to prioritise correctly when deciding which devices to turn off or replace.

How significant is occupant behaviour in determining total energy usage? Energy use can differ by two or three times among identical homes with similar appliances occupied by people from similar demographics (Socolow, 1978; Winett & Neale, 1979; Seryak & Kissock, 2003). These large differences in energy consumption are attributed to differences in consumption behaviour. If the home provided better feedback about which devices used the most energy then users could tweak their behaviour to make more efficient use of appliances.

Studies have investigated which types of energy feedback information displays (smart meters) are most successful in altering behaviour. Fischer (2008) found that “the most successful feedback combines the following features: it is given frequently and over a long time, provides an appliance-specific breakdown, is presented in a clear and appealing way, and uses computerized and interactive tools.” (my emphasis). Darby (2006) reports that direct feedback normally reduces energy consumption by 5-15%. Disaggregated data is also of use to utility companies as it helps with load forecasting.

What actions can be taken to reduce energy consumption?

Say we’re successful in creating a useful disaggregation system.  How could people use this information to reduce cost & CO2 output?

Before going any further, let me tackle two questions which you may have at this point:

Smart plugs can be inserted between an appliance and the mains socket; the smart plug can then measure the power consumption of the appliance. Yes, it would be conceptually easier to use smart plugs for all appliances in the home.  But it would be far more expensive: each smart plug costs at least £25; and most homes have around 20 appliances.  So it would cost £500 per house. And tedious to install.  And some appliances are hard-wired into the mains.  This solution simply won’t scale: by 2019, every​ house will have a smart meter; yet only a tiny, tiny fraction of the population would be at all interested in installing smart plugs for every appliance.

Let’s look at some real data to get a feel for what smart meter disaggregation involves: 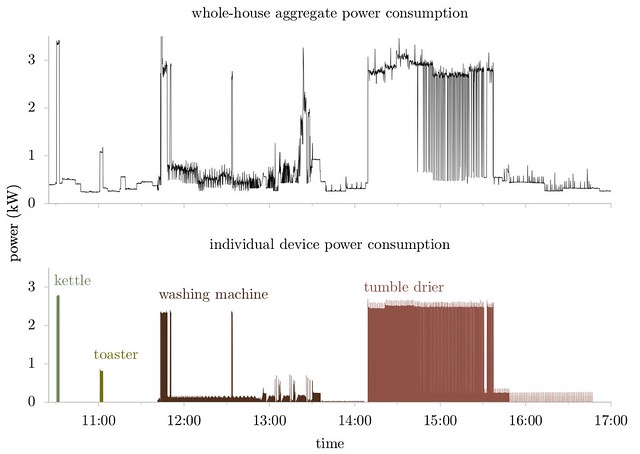 The top trace in the graph above shows the signal from my Current Cost home energy monitor over the course of an afternoon.  The top trace shows the total, aggregate consumption for my entire house.  The value of sample at time t is the sum of the power being consumed by every appliance active at time t​. The bottom trace shows the pure signature from four appliances, recorded using a smart plug.  The data displayed in the top and bottom traces were recorded simultaneously.  As you can see, the kettle and toaster signatures appear very clearly in the top trace.  The washing machine and tumble drier signatures are also visible in the top trace but have been somewhat distorted.

There are two ultimate aims of a disaggregation algorithm:

If we were only interested in disaggregating a small set of simple, two-state appliances like toasters and kettles then the disaggregation challenge would be fairly straight forward.  What makes disaggregation a juicy computer science problem?

The first challenge is that many appliances have multiple states, and the state sequence differs from run to run.  For example, here’s the power consumption of a single washing machine, run five times: 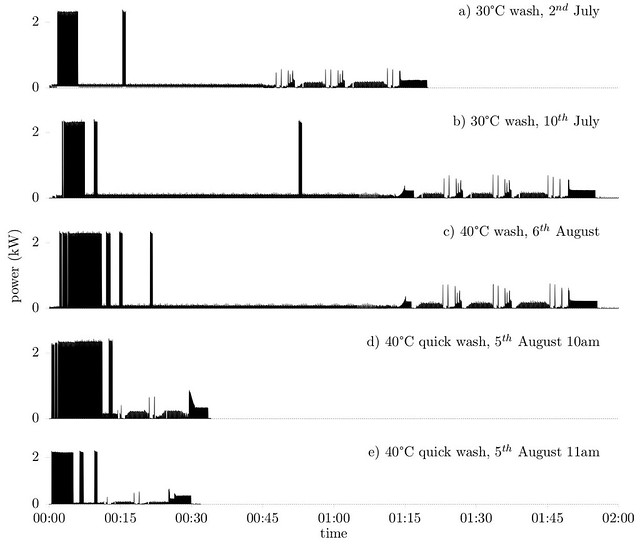 Challenge 2: variation between appliances of the same class 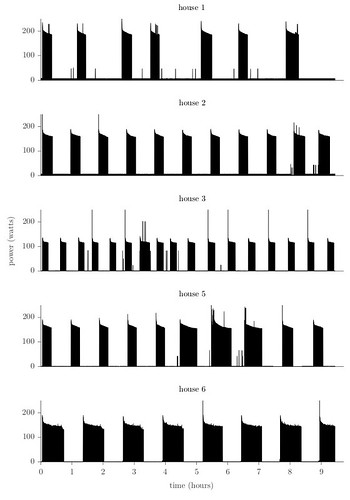 If the background is constant then the fridge signature is clearly identifiable:

The figure below shows a square wave background which is very similar to the square wave in the figure above but with one important difference: this time, the square wave changes state precisely in sync with the fridge signature (at 6 and 106 seconds). What effect does this have?

Here, the background has been generated by subtracting the fridge signature from 120. In the wild, it is extremely unlikely that the background will perfectly occlude the signature like this but it is possible. 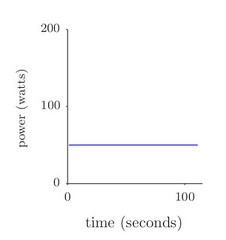 For example, several devices include heaters (e.g. kettles, washing machines, dish washers, tumble driers etc). These heaters tend to be hard or impossible to distinguish in the aggregate signal. This is for two reasons. Firstly, heaters all tend to draw close to this maximum power available at the socket (for the UK, this maximum is 13 amps × 230 volts = 3 kW ). Secondly, heaters are the archetypal “pure resistive load” so every heater draws 100 % real power and 0 % reactive power