The ultimate aim is to produce a smart phone application which can automatically identify a plant from a photo. One use case is some one who is out on a walk and wants to know the identity of a plant (specifically: my 2 yearold daughter keeps asking me to identify trees but I'm useless at it and existing tree identification apps are slow and laborious to use!). Another use case is a farmer who wants to know the identity of a strange new weed. One of the ultimate aims is to encourage a greater enthusiasm and curiosity for the natural world. 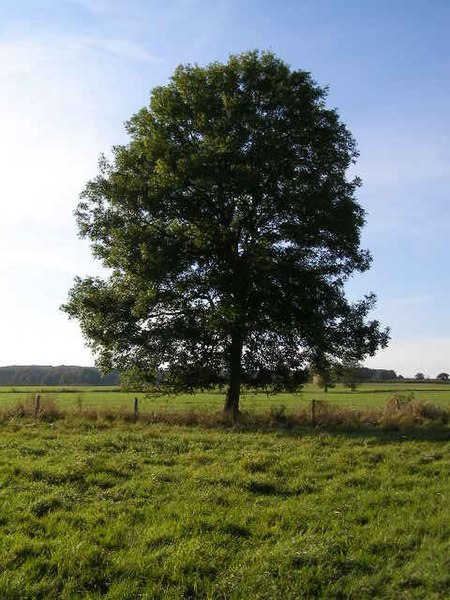 There are typically at least two stages to an image classification system: first "features" (edges, corners, blobs etc) are detected in the image and then these features are passed to a classification algorithm.

There are two main approaches to feature extraction: either hand-craft your feature detectors or build a system which can automatically learn which features to extract.

The alternative to hand-building feature detectors is to build a system which can automatically learn which features to detect.

Before considering how to do this on a computer, let's briefly consider the best object classification system we know of: the brain. Does our genome define separate feature detectors for speech, faces, plants, tools, animals etc? The answer is almost certainly "no"! What evidence is there? Firstly, the human genome only contains about 20,000 protein-coding genes. Even if we include the non-protein-coding regulatory DNA sequences, there is still far too little information in the genome to specify lots of different learning algorithms. And there are rather gory neuroscience experiments where the optic nerve of rodents has been re-routed at birth to feed into the auditory cortex. After a short while the "auditory cortex" of the brain has magically learnt to do sight (e.g. see Sharma et al 2000). One interpretation of this is that the brain automatically learns to extract features from the input data.

In the context of computer vision, automatic feature learning has several advantages over hand-built feature detectors. First, the system should find the most useful features to extract (whilst with hand-built feature detectors, you are making a subjective judgement about which features you think are best). Secondly, you don't need to go through months or years of R&D to build each new feature detector! Thirdly, automatic feature learning can be done in a completely unsupervised fashion. For example, you could get as many unlabelled plant images as possible (e.g. from flickr / google image search) and feed these to your system and it will automatically figure out which features to extract. How does it do this? It's basically trying to find the most compact representation for the data.

There are several ways to do automatic feature learning on a computer and they mostly come under the banner of "deep learning" (this is a poorly defined term but it pretty much means a large artificial neural network with multiple hidden layers). At the time of writing, deep learning appears to be a very effective technology for image classification. For example, here are some recent successes:

You could also try to exploit "non-image" data like the geographical location and time of year.

Deep neural networks are computationally very expensive (especially during training), hence it will almost certainly be necessary to run the net on a desktop computer with a fast GPU. GPU programming is notoriously tricky. But don't worry; you won't have to write frightening GPGPU code directly like Alex Krizhevsky did with his cuda-convnet (unless you want to!). Instead, a Python tool called Theano abstracts the implementation details away. You just write Python; then Theano does all the hard work of running that code on a GPU, and is surprisingly fast. Here's a 20 minute video intro to Theano. Building further on top of Theano (and making your life easier still) is the PyLearn2 library which allows you to specify deep learning networks with a relatively minuscule amount of code.

Whilst Theano and PyLearn2 are probably a great approach if you want a lot of control over your deep learning system, the fastest way to get started (i.e. requiring the least amount of coding and minimal understanding of the theory) is probably to dive straight in and use Alex Krizhevsky's cuda-convnet code (or Daniel Nouri's fork which implements dropout). This is the system which won the 2012 ImageNet "Large Scale Visual Recognition Challenge".

So one way to get started fairly quickly with the image classification aspect of the project would be to:

Learning algorithms in general, and especially deep neural nets, like having huge training datasets. Some sources of data might include:

CSG have very kindly said that we can use two workstations with fast GPUs for the plant recogniser project: graphic01 and/or graphic02. Each is dual-boot Windows and Ubuntu Linux and each has a modern, very fast GPU (the nVidia GTX780; capable of almost 4TFLOPS on 32-bit floats (the acronym 'TFLOP' means 1012 FLoating-point Operations Per Second). This level of performance would have put a single GTX780 at the top of the supercomputer Top500 list in 1999!) the other specs of the workstations are listed on CSG's Workstations page.

This proposal is just a hand-wavey proposal; you certainly wouldn't have to implement an entire smart phone application utilising cutting edge machine learning techniques. For example, if you wanted, you could drop the smart phone part of the project and focus on "just" getting a desktop computer to recognise plant images. The precise specification of the project will be defined in "Report One", due on the 31st Jan. We can tailor the project to your group's interests. And, of course, no one will expect you to produce a really high performing plant recogniser in a single term! You just need to give it your best shot (and try to have fun with it!)

Aspects of the project

If there are members of your team who want to focus on non-ML aspects then here are some ideas for non-ML things to do on this project, if you wanted:

Building a complete smart phone plant recogniser app will require are at least three or four components: the phone app; the server; the 'plant categoriser'; acquiring and pre-processing training materials. The basic idea is that a smart phone probably doesn't have sufficient processing power to do the image classification on the phone (at least, not without very time-consuming optimisation of your code; and possibly running your code on the phone's GPU) so you'll probably need to do the image classification on a server.

Here are some brief hand-wavey ideas about each component. Just to emphasise: the list below is just to give you a feel for the project; you can completely ignore this list if you have better ideas!

Just to emphasise: you are certainly not expected to implement all these ideas! It would take years to implement all these features! I only mention them to give a feel for the potential breadth of the project, if breadth is what you want (but, of course, be aware that Spring term will fly past and you should keep your group project specification as simple as possible).

Risks and benefits of this project

It is important to point out that MSc group projects aren't marked on your ability to implement bleeding-edge computer science. For example, the "Best MSc Computing Project" from Spring 2012 was a lovely new website for a local doctors' surgery. If your aim is to maximise your chance of winning "best project" whilst minimising your effort then embarking on a project which makes use of bleeding-edge tools and techniques carries some risk! We must also point out that neither supervisor on this project does computer vision research as their 'day job' (although Dr Knottenbelt did do some research on South African flora in the 1990s!). But Jack will be using Deep Learning techniques for his PhD in Spring; and will do all he can to help you... but you do need to be aware that you will quickly become the department's experts (possibly even the world's experts) in using computer vision for recognising plants; and hence you will need to be comfortable with being pioneers ;).

But there are real benefits of the project. For starters, you have a real chance of building a system which can compete very favourably in the "PlantCLEF 2014" competition; and it's very rare for MSc groups projects to have a chance of competing in international competitions. Secondly, "deep learning" is a topic which a lot of people are excited about (including Google, Facebook etc) but very few people have hands-on experience with the technique; so if you want to do research or get a job in machine learning then a project on deep learning should look attractive to employers and academics. Also, whilst it is true that machine learning can become terrifyingly mathsy, it is also the case that image classification is a very popular application of ML in general and deep learning in particular, so there are lots of papers and quite a lot of code that you can use (i.e. you can take existing approaches and re-use them without having to understand the innards really well). Also, there is great scope to turn this project into a successful app; the demand for such as app is demonstrated by the fact that the leafsnap app was downloaded "almost a million times" as of 2012. And, finally, the project should be fun! (if you get excited by using cutting edge techniques to build a system which has a good shot at doing object recognition almost as well as a human)

If lots of groups are interested in this project then we may consider running more than one group on this project (up to a maximum of two or three groups at a real push). If everyone wants to then you could compete directly; perhaps using different machine learning techniques. Or you could collaborate in some way (e.g. split the project up). Or groups could target different image classification challenges (I think this option would be my preference. One advantage of going this route is that groups could help each other out more on the image classification techniques. And, of course, each group would have the potential to have a greater impact on the target problem domain.). There are lots of other object classification tasks ripe for innovation. e.g. classifying microscope images of blood cells as either "healthy" or "malaria-infected". (A research group at UCLA recently built a "gamified" solution to this problem:)