Yesterday I did my first ‘making workshop’ with fifteen 5-6 yearolds at our new local primary school, The Belham (my 4-yearold daughter has just started at The Belham). My hope with these workshops is to encourage the kids to try building interesting creations and, along the way, sneak in some stuff they might not have played with yet like basic electronics. I’ll be doing two workshops a month. I suppose the main aim is to show how much fun it is to build stuff (which shouldn’t be hard: the kids seem to know this instinctively). 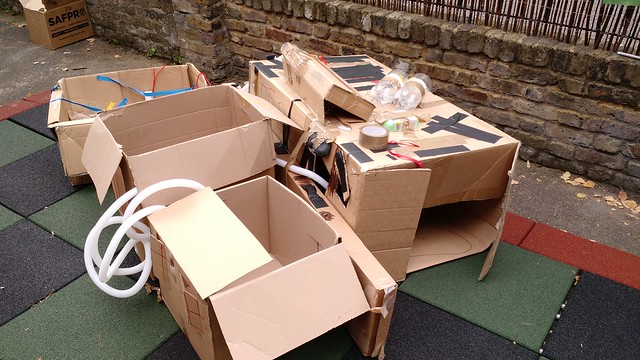 The plan was for the children to get into three groups of five children. Each group would make one den out of cardboard boxes. If the kids wanted ‘windows’ cut into their boxes then they’d draw the outline of the window and an adult would come along and cut out the window. They’d then run plastic pipe between the dens to make ‘telephones’. Then we’d install lights, batteries and switches in the dens. And it wasn’t just me running the workshop: we had two awesome teaching assistants (i.e. two full-time staff from the nursery school) who were much better at handling the kids than I was! 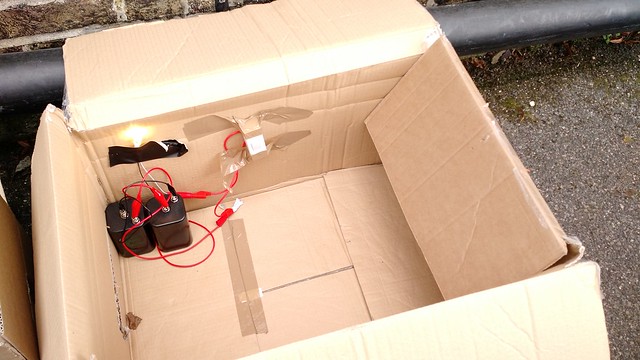 That was the plan! And all of those things did happen! Except that the ‘groups’ were much more fluid than I had expected; and some groups split (not through any animosity; just because some children preferred making their own den or working with one or two of their friends). I didn’t fancy trying to enforce the ‘three groups of five kids’ idea so I let them form their own groups (not sure if that was wise?!?) The kids all had lots of fun!

Well, that’s not entirely true… one child got a bit upset towards the end because he wanted his own den and light but there weren’t enough boxes or lights to allow this. We tried cheering him up. And tried persuading him that team work is important. But we failed to get him to re-engage which I felt bad about.

Apart from this, the session seemed to go well. It got off to a good start when several of the children started shouting out “I want to be an engineer when I grow up!” (this chant was led by a couple of girls, I hasten to point out. Although I almost feel bad for pointing this out. That’s the way it should be, right?!) I was very impressed by some of the things the kids made, and how excited the children were about what they were making. They loved making dens that they could climb into. The size of the box didn’t seem to matter too much (as long as it was big enough for a child to hide in!) They had lots of fun with the pipe telephones. They loved showing off their creations to their parents at the end of the day.

I was rather apprehensive about the electronics stuff. I was worried that the kids wouldn’t like the electronics. Or the kit would break. Or they’d get frustrated when things broke and give up and be put off electronics for life(!). But I was amazed at how excited they all were about putting batteries, switches and lights in their dens. And some of the kids quickly became remarkably good at fixing their circuits when they broke (and would then help their friends). And they also had fun trying their own circuits (most of which didn’t do anything but they kept trying!) 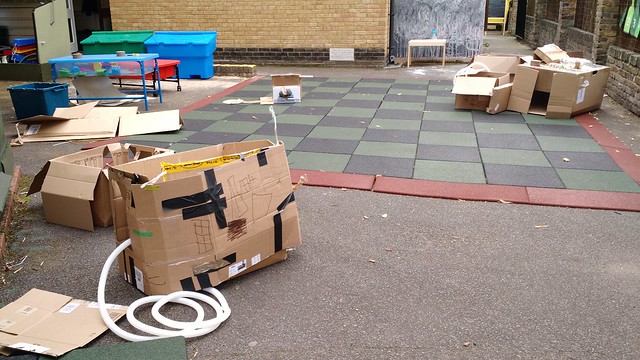 For the next session, I plan to put the batteries into plastic enclosures, so all the kids have to do is hook two banana leads into the battery box, instead of faffing around with crock clips. I also plan to put self-resetting fuses in the battery boxes, and maybe a buzzer which will squeak at the kids if the load is a short circuit (so the kids get instant feedback that ‘this circuit is wrong!’ without having to wait for stuff to melt!)

All in all, I had a great time and am looking forward to the next session!

Please do chip in with any comments / suggestions / examples of other sessions for similar aged kids.

(By the way, sorry the photos don’t include any children. We’re not allowed to show photos of the children on a public website like this one!)

One aside: some parents and teachers asked me what I do for a job; to which I replied “computer scientist”. Their reaction was always “oh, wow, that’s very different to this”. Which kind of surprised me. I think of building dens with old cardboard boxes and gaffer tape as pretty similar to doing computer science research! In both situations you start with an idea of what you want to build and you have a bunch of existing resources (boxes or code), some of which you can use as is and some of which can be used with some modification. Some components you need to build from scratch. And then you set about connecting the bits that you have into a system. It won’t be exactly what you had in mind when you started. Some of it will be elegant. Some of it will be a last-minute hack that is (literally or figuratively) held together with tape. Lots of bits wont work the first time and will need to be pulled apart. If you’re unlucky then, when you’re 2/3rds of the way through building, you realise that what you have in front of you isn’t what you need at all so you start all over again (but you needed to go through that process to help define what you really need). Or maybe you realise that what you have in front of you can be used for way more tasks than you originally planned. And that’s half the fun of it! 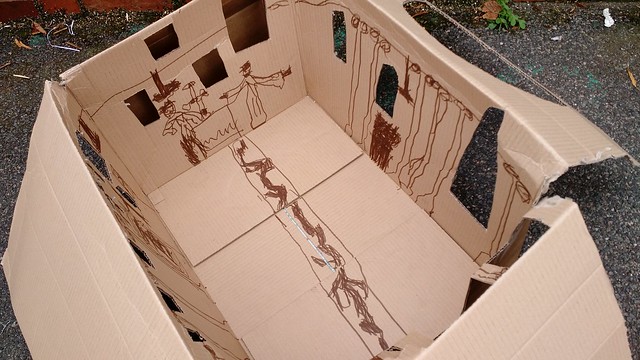 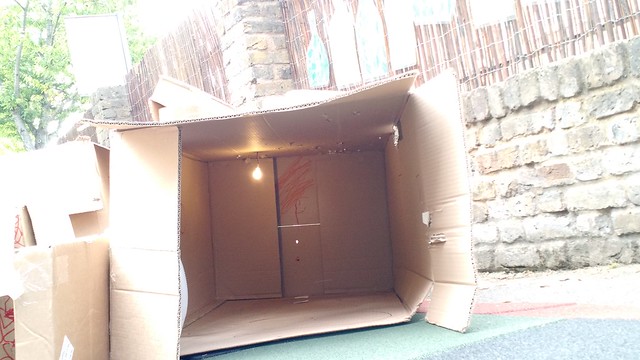 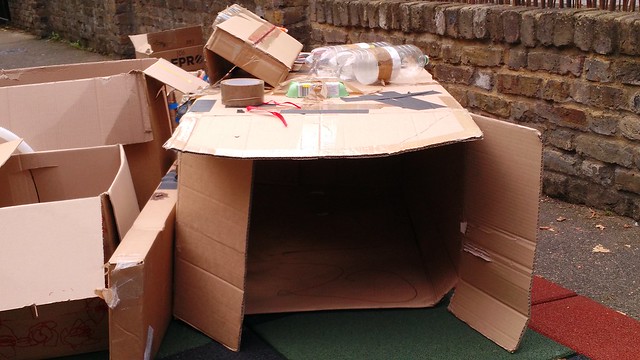 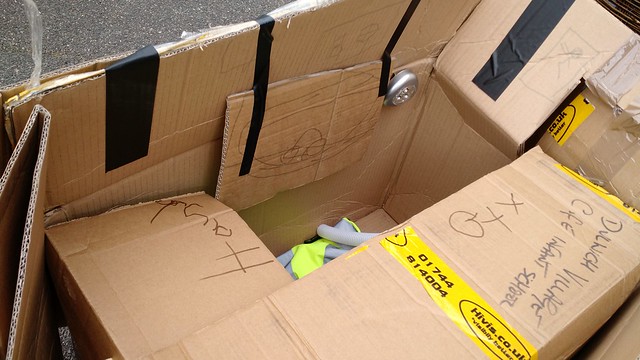 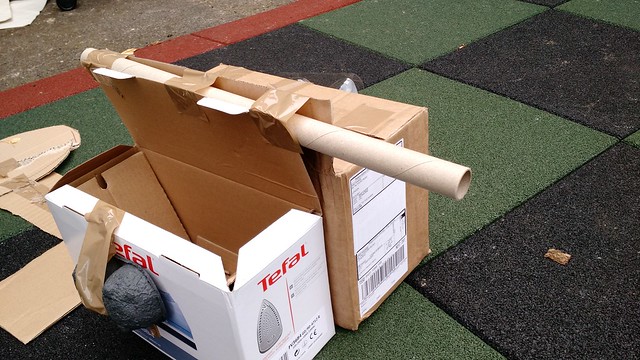 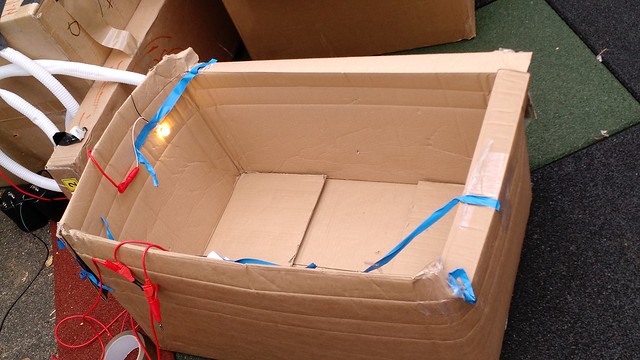