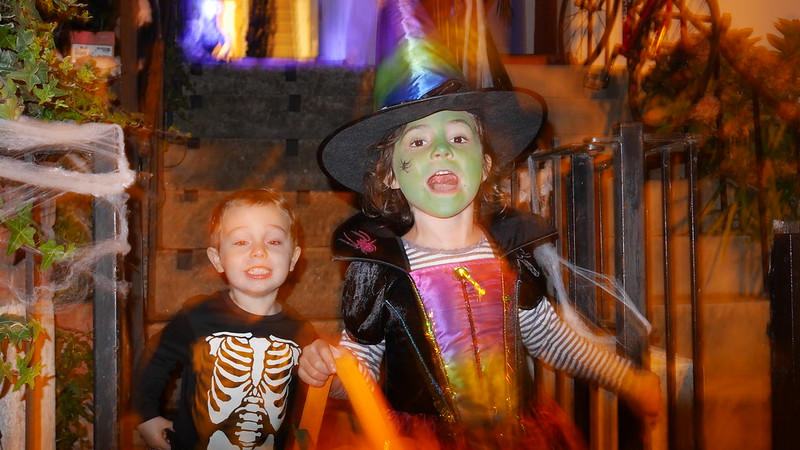 For Halloween 2016, we made a “haunted staircase”. Spooky sounds were triggered as unsuspecting trick-or-treaters walked up the stairs outside our house. This project won the Bare Conductive Halloween competition! This blog post describes how we made our staircase…

(the photo above was taken by my wife, Ginnie)

Here’s a video of the final result, as demonstrated by my five year-old daughter, Olive:

(sorry the video is a bit dark!)

To trigger the sounds, I used a Bare Conductive Touch Board connected via USB to a laptop running Ableton Live. The Touch Board uses capacitive sensing to detect either a direct contact of a hand or, if the sensitivity is increased, then it can detect a nearby hand or foot. Here’s a video I made while I was testing the Touch Board. Here it’s being triggered by me touching the board’s contacts:

To detect a person’s foot on each step for the haunted staircase, I gaffa taped a wire to each step like this: 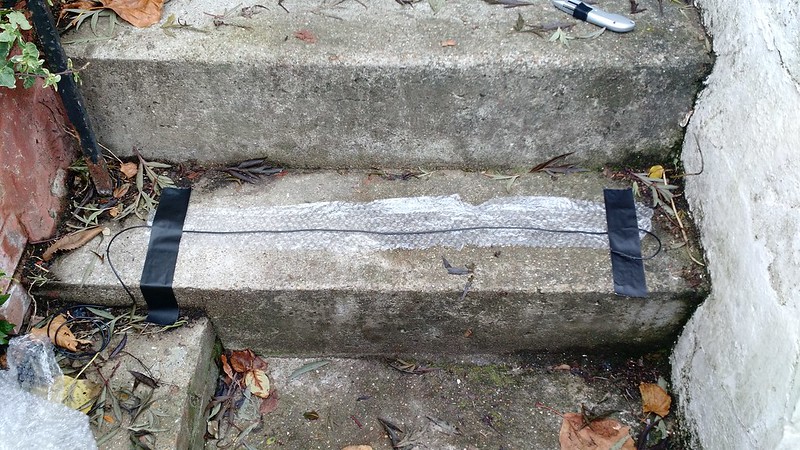 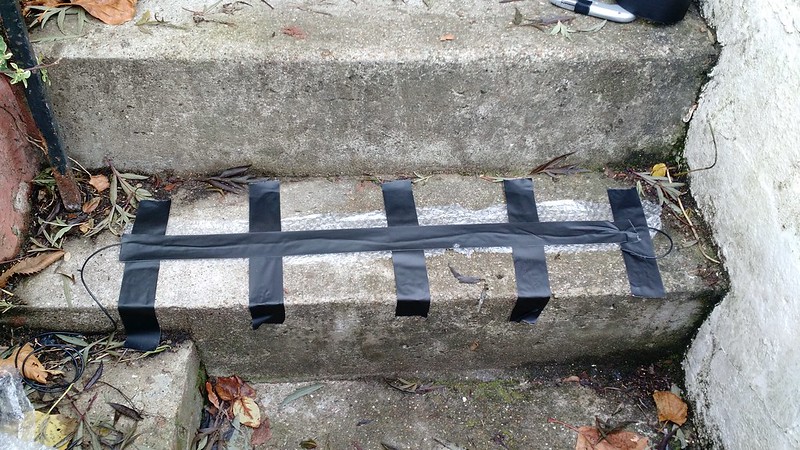 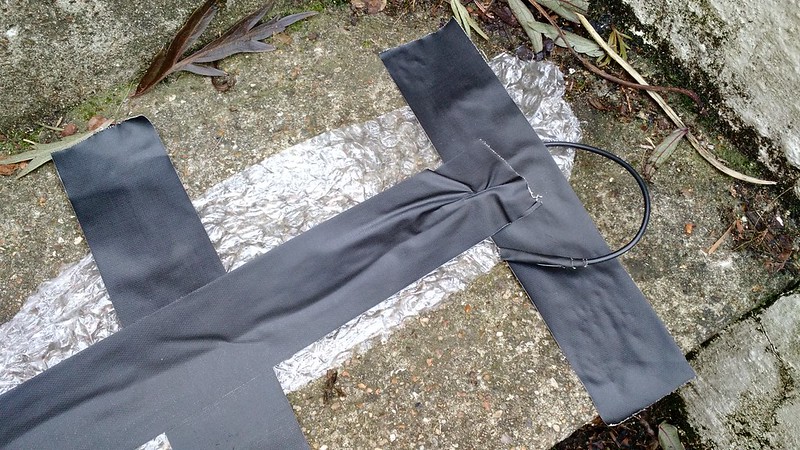 I originally tried gaffa-taping the wires directly to the concrete steps but this didn’t work very well, so I experimented with separating each wire from the concrete step. I settled on using a strip of bubble-wrap under each wire, and this seemed to work well.

The Touch Board is programmed using the Arduino IDE. I followed Bare Conductive’s excellent tutorial on configuring the Touch Board to trigger Live. I modified the code to configure the Touch Board to send MIDI notes instead of proximity mapped MIDI controls (do this by commenting out the code under the “Proximity (CC) electrodes” section and uncomment the code under the “Touch (note) electrodes” section); and also set the touchThreshold and releaseThreshold really low. The exact numbers needed quite a bit of tweaking to get it to reliably detect a child’s foot on each step! My code is on github.

The Touch Board sends MIDI commands to Ableton Live over a USB connection. Each audio sample lives in separate file. I used the “Zone” panel in Ableton Live’s Sampler’s to configure each sample to be triggered by a single MIDI note. Sampler provides lots of controls for messing with the audio and adding spooky reverb etc.

Some of the samples were recorded by my two year old son and five year old daughter. Other samples were downloaded. I wanted to record some audio of our dog barking and slow this right down but I wasn’t patient enough to catch a good dog bark on my audio recorder!

To make the stairs look spooky, we hung a blackout-drape over the stairs. This was supported by four straight lengths of wood which were wire-strapped to the railings. We made some simple ghosts out of cardboard and old sheets. To light the staircase, we used cheap battery-powered LED lights with some coloured lighting gel.

It was lots of fun to build and kids enjoyed it!

Next time we might play with proximity sensing. Or use Ableton Live to drive motorised ghosts! Or control lights (Ableton Live sends MIDI commands and it should be fairly easy to use an Arduino (or the Touch Board) to receive these MIDI commands and drive motors and/or lights). And we definitely need to get some dry ice! And maybe trigger lights at a distance: e.g. trigger strobes in the upstairs bedroom. Or fill our car with dry-ice and then start a slow, pulsing red light in the car as people get near; and maybe have a motorised “hand” thump against the inside of the car window!

Here are some more photos: 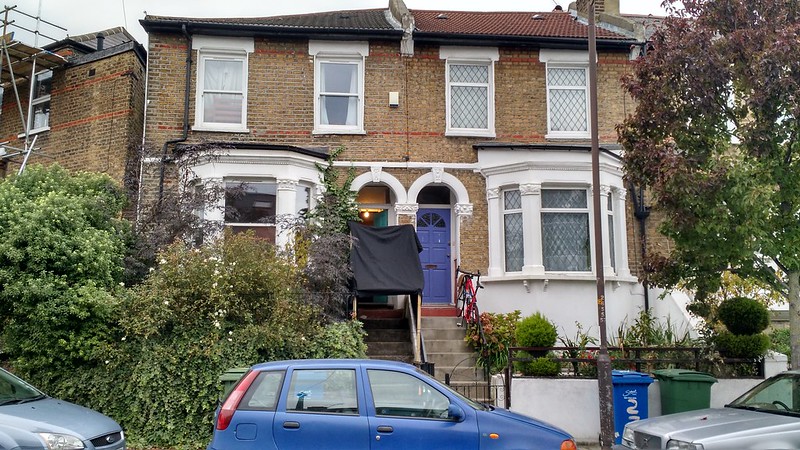 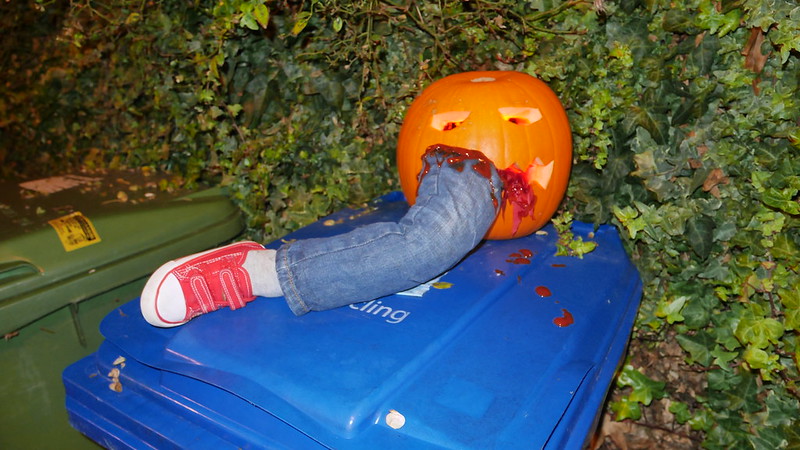 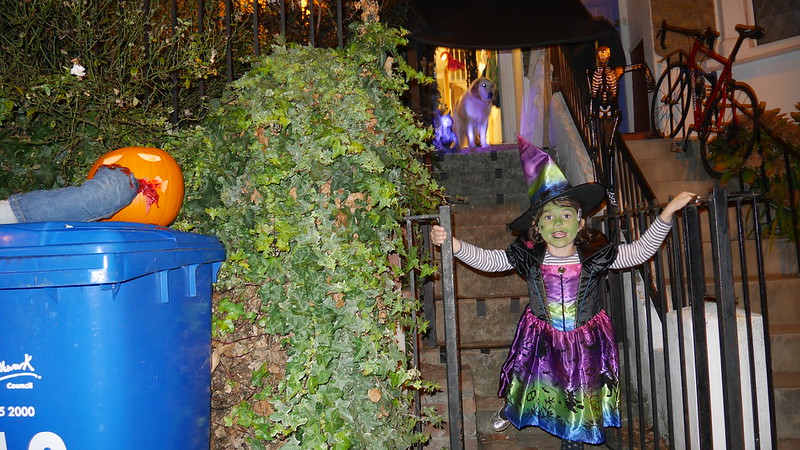 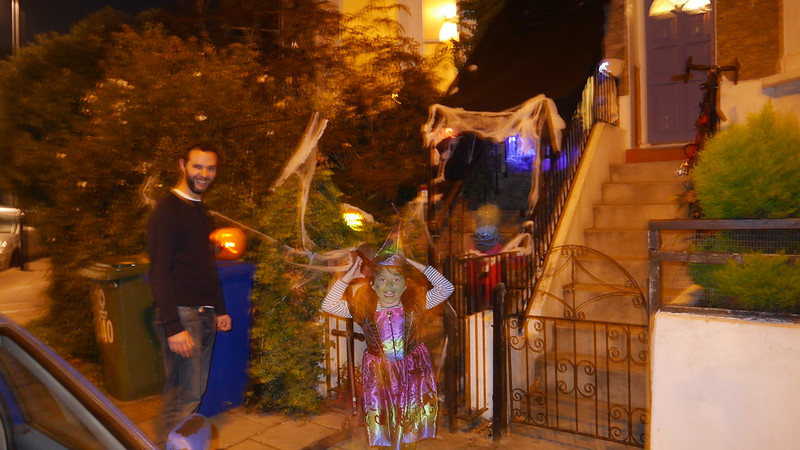 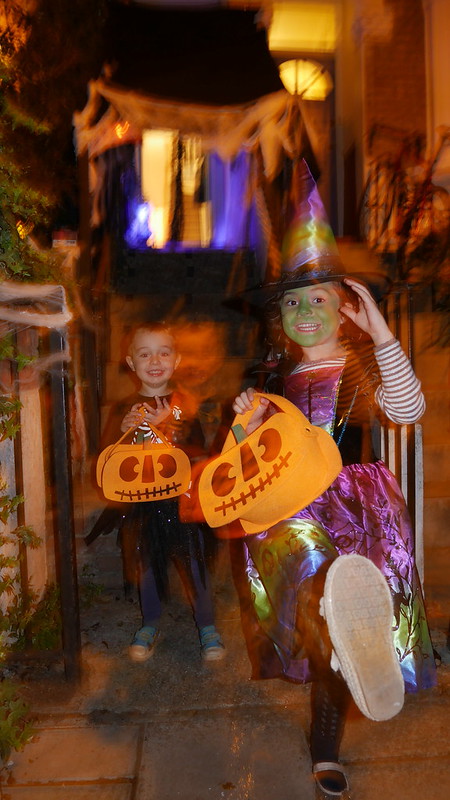