I have been recording the power consumption of my whole home using two systems: a Current Cost CT clamp and my home-brew “sound card power meter”. The latter samples my home’s voltage and current waveforms at 44.1kHz and calculates the apparent and active power once a second.

Most of the time, the signal from the Current Cost CT clamp and my SCPM agree remarkably well.

One situation where the two systems disagree wildly is when our kitchen ceiling lights are on. These lights consist of 10 x 10W Philips dimmable LEDs driven by a cheap TRIAC dimmer. Here’s a graph showing a time period where the lights start off, then turn on, and then turn off again. The Current Cost reports a rapidly varying power consumption. The SCPM, on the other hand, reports a very steady power consumption. I have also plotted the mains voltage to demonstrate that the mains voltage wasn’t doing anything odd during this period:

What’s going on? Why does the Current Cost think the kitchen light’s power consumption wobbles up and down wildly?

My sound card power meter records the voltage and current waveforms (sampled at 44.1kHz and downsampled to 16kHz). Here’s one and a half mains cycles (30ms) of the whole-home current waveform while the kitchen lights are on: 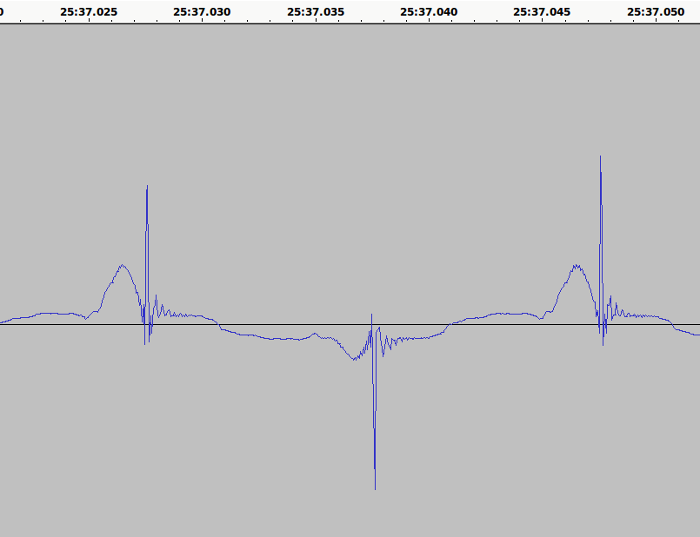 My hunch is that the Current Cost CT clamp transmitter sparsely samples the mains current (to minimise battery usage) and hence outputs a wildly different answer depending on which part of the current waveform the transmitter samples. My SCPM system, on the other hand, samples continuously and hence doesn’t suffer from this problem.